The duodenal switch is performed less frequently than the two major bariatric procedures (gastric bypass, gastric sleeve) however it offers the greatest degree of weight loss potential, combining many of the advantages of gastric bypass while minimizing some of its risks.1

How the DS Works:

In the first part of the procedure, a significant portion of the stomach is cut away along the greater curvature and removed from the abdomen. The remaining, smaller gastric sleeve means that less food can be consumed at any given time. This, in turn, allows the patient to feel fuller sooner. Unlike the gastric bypass, the stomach that is left behind is still functioning as a normal stomach with the pyloric valve in place, where as in the gastric bypass procedure, the pyloric valve is made completely ineffective.

The second part of the surgery, the small intestine is re-routed to create two tubes, one that carries food and the other, bile and pancreatic fluid. Both arrive at a common tube, lower in the digestive tract allowing digestion to continue. The diversion means that there is less surface area for calories to be absorbed into the small intestine walls, reducing the number of calories absorbed. No small bowel is removed during the duodenal switch operation.

The duodenal switch procedure is usually performed in a minimally invasive manner, often leading to a shorter recovery and hospital stay when compared to a traditional open procedure.

Learn more about this Procedure 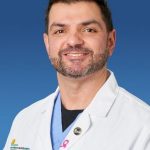