Gastric banding is often referred to by one of its trade names, Lap-Band® or Realize® Band (no longer on the market). The Lap-Band was first introduced in the US in 2001 by Allergan, followed by the Realize Band, introduced by Ethicon Endo-Surgery in 2007. The gastric banding procedure is performed laparoscopically, meaning that a few small (approximately ½ inch) incisions are made to access the abdomen rather than a large, single incision.

The gastric band does not require any cutting or stapling of the stomach, nor does it require the re-routing of the intestine, making it one of the few bariatric procedures that can often be performed on an outpatient basis with same-day discharge. Also unique to the band is the fact that it is adjustable and reversible if necessary. 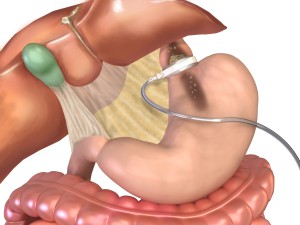 The gastric band is purely restrictive, which means it limits the amount of food a patient can eat, causing weight loss.

The gastric band consists of the implantation of three components. First is the band itself, made of biocompatible silicone-type materials to ensure there is no adverse reaction once it has been implanted. The band is placed around the top of the stomach and tightened to form two interconnected chambers of the stomach. The smaller, top chamber holds the food before it passes through to the rest of the stomach. Since the smaller, upper pouch restricts the amount of food a patient can eat in one sitting, it allows the feeling of fullness or satiety, consumption of less food and eventual weight loss.

Finally, the two devices are connected by soft, thin tubing, which allows saline to be transported to and from the port during adjustments. The saline fills small reservoirs on the inside of the band, causing it band to become tighter. When the band becomes tighter, food travels from the upper chamber to the lower chamber of the stomach more slowly, restricting food consumption.

It is important to remember that gastric banding surgery is still major surgery and should be treated as such. It has many benefits and some potential risks. These potential risks should be understood at a consultation with a qualified bariatric surgeon before undergoing the procedure. 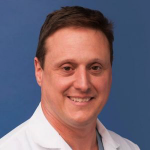 John DePeri, MD, FACS﻿
View Full Profile Visit Website
Dr. DePeri is a leading general and bariatric surgeon in the Jacksonville area. Dr. DePeri has a special interest in advanced laparoscopic or minimally invasive surgery. He is also an expert in performing various bariatric and general surgeries with robotic assistance.